A week after it was shut down, fearing a malfunction, the Israeli Air Force restarted its fighters. "F-35" for work

Very virulent.. What is the Marburg virus and will it become an epidemic? 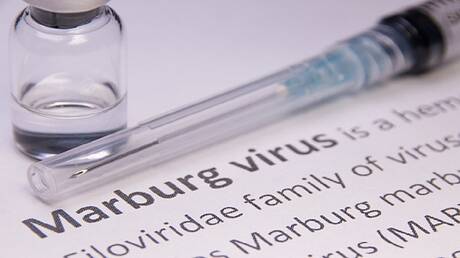 The World Health Organization announced the registration of two cases of Marburg virus in Ghana, and their deaths were confirmed later, in a precedent that was the first since 1967, when 12 outbreaks of the virus were recorded in southern and eastern Africa.

The World Health Organization said that the mortality rate for Marburg virus infection has ranged from 24 to 90% during previous outbreaks, explaining that this percentage depends on the strain of the virus and the method of dealing with cases.

Marburg virus disease is highly virulent, can become epidemic, and is associated with a high mortality rate (24 to 90%), and in the early onset of “Marburg virus disease”, it is clinically difficult to diagnose to distinguish it from other tropical febrile diseases, due to the similarity of its clinical symptoms.

Differential diagnoses that should be ruled out include Ebola virus disease, as well as malaria, typhoid fever, leptospirosis, rickettsiosis, and plague.

Marburg virus is transmitted by direct contact with the blood, bodily fluids, body tissues of infected people or wild animals such as monkeys and fruit bats.

There are currently no specific treatments or approved drugs for this disease, however supportive care including close monitoring of vital signs, patient resuscitation with fluids, electrolysis and acid-base monitoring along with treatment of co-infections and organ dysfunction are critical components. to treat and improve patient outcomes and survival.

Some monoclonal antibodies are well under way, and other antivirals are being studied for Marburg virus disease, such as galdisvir, favipiravir, and remdesivir, in clinical trials, but with no clear results.

Symptoms of infection with this deadly virus include headache, vomiting of blood and muscle pain, as well as high fever in the person infected with the virus.

Some patients later bleed through holes in the body, such as the eyes and ears.

A week after it was shut down, fearing a malfunction, the Israeli Air Force restarted its fighters. "F-35" for work