Governor of Sevastopol: He shot down a drone near Belek airport without loss

Guardiola: Bernardo Silva will be with us next week in Barcelona

Exit crisis.. Why is everyone refusing to sign Ronaldo? 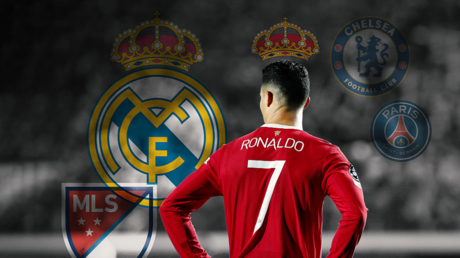 All attempts by Portuguese star Cristiano Ronaldo to leave Manchester United and join a new team during the current summer transfer window have so far failed.

Paris Saint-Germain, Bayern and Chelsea are all clubs that refused to sign Ronaldo despite wanting a player with the perks and characteristics of a Portuguese star.

Paris Saint-Germain currently doesn’t have a clear “goal-shooter” despite having an outstanding striker, Kylian Mbappé, but the latter prefers to play from the side to take advantage of his speed.

As for Bayern Munich, it will be very difficult to find a replacement for their Polish striker Robert Lewandowski if he leaves this summer, in particular for Barcelona.

Chelsea need to expand their attacking options following the departure of top scorer Romelu Lukaku to Inter Milan on loan.

However, all these clubs refuse to include Ronaldo for three reasons, namely Ronaldo’s age, his salary and his “selfish” nature.

Bayern refused to include the 37-year-old Ronaldo because making the deal would violate the club’s policy of signing players under 30.

This was stated by the CEO of Bayern Munich.
Oliver Kahn made the offer by saying “I appreciate Cristiano Ronaldo as one of the greatest players in the world, but unfortunately we are not interested in including him because he doesn’t fit our philosophy.”

And the French newspaper Le Parisien claimed that Paris Saint-Germain also refused to include Ronaldo because…
“There is no place for the Portuguese star in the Paris team at the moment.”

This answer seems logical: “Ronaldo has no place in Paris”, which is full of stars like Lionel Messi, Kylian Mbappe and Neymar, whose salaries are high.
The club and the inclusion of Ronaldo, who will need an annual salary of at least 30 million euros, will be a big risk for the Paris side, which recorded a deficit of 224.28 million euros last season.

Chelsea manager German Thomas Tuchel was decisive and excluded Ronaldo from his team’s plans for this summer’s Mercato due to the Portuguese’s ‘selfish’ personality, as the German manager is not looking for a player who takes the team out of the spotlight. players in general.

The only offer Ronaldo received this summer was from a Saudi club, but the Portuguese star turned him down due to his desire to continue playing at the highest level of football despite his advanced age.

Governor of Sevastopol: He shot down a drone near Belek airport without loss

Guardiola: Bernardo Silva will be with us next week in Barcelona

Previous articleBiden says he has no regrets about his threats to Saudi Arabia
Next articlePentagon: We would welcome Russia to the negotiating table with Ukraine if it did so