the president "Thought": Washington is ready to do everything to maintain its power in the world 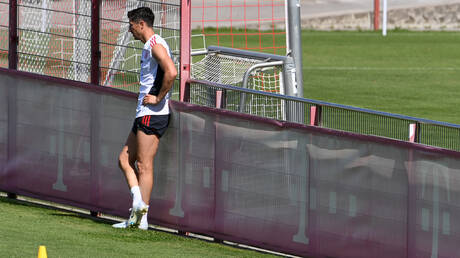 Bayern Munich striker Robert Lewandowski seemed unmoved as he resumed his team’s training, media reported, amid his desire to move to Barcelona.

The German newspaper Bild published the video and pointed out that “his indifference to exercise was very clear and his body language means a lot. He definitely wants to go to Barcelona.”

And she added: “Lewandowski was a few minutes late and was the last to enter the field. Without much enthusiasm, he was also the last to start a warm-up and then practice without finishing it. His relationships with colleagues no longer improved. as before, he only spoke with Leon Goretskaya and joked with Jamal Musila.

And she continued: “We also didn’t see him talking directly to Nagelsmann[Bayern coach]and it was remarkable, especially when the latter gave his instructions, since Lewandowski was out of the circle of players and turned to the other side.”

She explained, “He didn’t put in any personal effort during the practice match and didn’t score. The losing team should have been punished by the weirdos, but he didn’t and went to the locker room.”

But other reports showed the 33-year-old’s behavior improved on Thursday, he was not late for training and his body language was good as he joined a group of players who celebrated the birthday of team striker Serge Gnabry and shook hands with coach Nagelsmann.

Uncertainty about Lewandowski’s future was reflected in his family, and his wife responded on social media about whether her husband would move to Barcelona, ​​saying: “I would like to know that too.”

And Lewandowski announced at the end of May that his “story” with the German club was “nearing completion” during a press conference with the Polish national team.

The Catalan club showed great interest in including the top scorer and twice winner of the FIFA Player of the Year award.

And Barcelona President Joan Laporta said earlier on July 7: “We have made the player an offer, we are waiting for a response and see if it is positive.”

According to some media reports, the blue garnets offered about 40 million euros, but he returned and raised the price of his offer. Lewandowski has defended the colors of the Bavarian club since 2014, scoring 344 goals.

the president "Thought": Washington is ready to do everything to maintain its power in the world